In the early 1900’s, premature death was due mostly to communicable diseases… Today death is mostly due to lifestyle related conditions. Bad eating habits, stress and lack of exercise often lead to heart disease, stroke, cancer, and diabetes. Much of the food we eat is not safe anymore due to the overuse of food chemicals and additives.

In the latest World Health Organization Report we see that of the nearly 56 million people who have died, 16.97 million people, or 33%, have died of cardiovascular diseases.Over 7 million have died of cancer-related diseases. 3.6 million have died of respiratory diseases, while another 101 million are listed as suffering from them. And just over 3/4 of a million people have died of diabetes. This and earlier reports point to the disturbing conclusion that these non-communicable diseases will increase in occurrence. Think about it, the incidence of cancer has doubled for the people born in the 1940’s compared to those born during the years 1888-1897.Now, 1 in 3 North American women will be diagnosed with cancer during their lifetime.   Get Intra to Fight Body Pollution Now

But WHY is this happening?

Let’s look at the air we breathe

One billion people, mostly women and children, are regularly exposed to levels of indoor air pollution exceeding World Health Organization guidelines by up to 100 times.Next time you are dropping your children or grandchildren off at school, see how many kids have inhalers to help them with asthma-related breathing problems.  Then think back to when you attended school and the magnitude of the problem will hit you.  The level of pollution has overwhelmed children’s natural ability to fight back and deactivate the toxic overload.

It is predicted that by the year 2020, 8 million people will die annually from the air pollution we cause .

How about the water we drink?

Millions of people around the world have no choice but to consume water that exceeds the lead contamination level deemed acceptable by the World Health Organization. Studies show that over 80% of U.S. streams and rivers are contaminated with a broad array of medical drugs, including hormones, antibiotics, antidepressants and heart mediations, as well as chemicals from personal care and household cleaning products.

Now, let’s look at the food we eat

We used to say, „An apple a day keeps the doctor away.“ … but now, those lovely looking apples we eat are full of pesticides.  Even the worms do not want to eat them!  Furthermore, most of these apples are grown thousands of miles away, picked while they are still green and exposed to ethylene gas so they can ripen as they are being shipped to their destination in a truck.  Not only do these fruits still carry a residue of the chemical but because they are picked early, they may have little or no nutritional value by the time they reach your kitchen table. Our modern food supply has become a mixture of chemicals and additives with the emphasis on appearance and taste as well as shelf life, rather than on the nutritional value.  That’s why by middle age many people have as much as 20 pounds of undigested, putrefactive food in their colon.  No wonder why colon cancer is the number one cancer in the United States.

Body Pollution Affects Every One of Us

Back in 1976, the U.S. Environmental Protection Agency (U.S. EPA) began a program of collecting and analyzing human fat tissue samples – looking for toxic compounds.  They searched for and studied 54 different environmental toxins.  What they found was alarming.  100% of the people they studied had toxic chemicals stored in their bodies and at least 76% of all people had more than 20 different chemicals stored.

Well, it was 1976, things may have been improved … or is it? On January 2004, a study released by the Atlanta Centers for Disease Control (CDC) shows alarming levels of pesticide contamination in North America. CDC researchers tested the blood and urine of more than 9,000 people for level of 23 pesticides, and found that 100 per cent of the subjects carried detectable levels of contamination. The study shows the average American has 13 pesticides in his body, many at levels well above health thresholds set by U.S. EPA. Think about it!  Every single person had some toxins in their bodies – undeniable proof that body pollution is a very real concept and a threat to your health.

Our world is vastly different from that of our ancestors.  While we are more aware of environmental pollution today than ever before, we can’t avoid it.  We eat, breathe and live in our modern environment, making the ingestion of toxins a part of everyday life!  Click here to learn more about Intra herbs about body pollution. 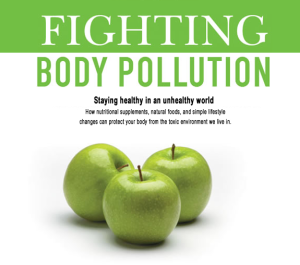 It seems that not a day goes by without seeing some negative story in the newspaper or on television regarding our environment. Global warming, air and water pollution, the thinning ozone layer…the list goes on. As a nutritionist, I can’t help wondering what this is doing to our health. How could environmental pollution damage the earth without damaging us as well? The effect of the environment on our health really hit me on a trip to Asia when I noticed more than half the people walking or cycling the streets wearing face masks to protect themselves from dirty air. Thankfully I live in Canada, I thought. Then I learned that air pollution can travel from Asia in North America in 3 days – not much longer than it took me to fly home! The truth is that every living thing on the planet is affected by the environment, and none more than we are. How can we protect ourselves from the damage of environmental pollution that enters our bodies – what I call body pollution? What steps can we take to maintain or improve our health in today’s polluted world?

This book is your guide to using the latest research into the benefits of nutrition, food supplements, exercise, and stress reduction to maximize your health. Although we cannot avoid pollution entirely, we can all take steps to reduce its negative impact on our body. I outline easy and practical steps you can take today, that over time, will add years of productive, healthy time to your life. Paul Kramer, BC

Strong in antioxident ingredients that are specifically formulated to support the body at the cellular level.

Lifestyles intra juice provides nutrients that are no longer found in our food, but are essential to our bodies.

Due to the incredible benefits of Lifestyles intra, it has become one of the most popular herbal blends in the world today.

People feel great! They have more energy and lifestyles intra maintains the feeling of wellbeing.

Lifestyles intra is also available in capsule form. Whether you are traveling on business or pleasure, or just going away for the weekend, now you’ll never have to be without your
Lifestyles intra.

Excellent QUALITY CONTROL – Some of the tests performed by Lifetyles on each product.

Excellent Potency of each Intra –  Active ingredents are tested to ensure the exact potency claimed on the label.

Disintegration – A Tablets and capsules are tested to ensure fast and complete absorption by the body.

NO Heavy Metals – Every ingredient is tested to ensure freedom from potentially harmful and heavy metals.

Stability – Active herbal ingredients are tested to ensure stability and potency for the entire shelf life of the product.